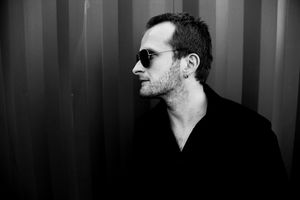 Although, I've been writing, composing and performing music throughout my entire life, I've never really considered myself as being anything else but an independent and dedicated singer-songwriter. Creating music and hopefully reaching out and touching people who takes an act of listening, has always been my main effort. To pursuit some kind of "larger than life" musician life, including all the bullshit, has never tempted me. It's all about the music and the songwriting itself, in its own right.

Here's some basic information about my music, albums and some of the great musicians involved.

In 1998 I joined up with late musician Knud Sandberg, who turned my musical understanding upside down and truly inspired me to take my musical work further up the road. From 1998 to 2000 we played a bunch of sessions together and recorded a couple of songs at my home studio. Songs which musically awoke us both, i guess. Anyway, we'd never manage to finish this material together, Knud died in 2000 shortly after. Most of these original recordings, from that period of my life, was compiled on a limited homemade CD entitled "The things we left unsaid - Acoustic Guitar Sessions" (2005). Some of these recordings was later properly released on "Sketches - Demos and Outtakes (2009) - A CD compilation of rare demos and outtakes recorded in the period from 1998 to 2008.

In 2004, I joined up with "jazz-style" lead guitarist and musician Jesper "Santana" Holst. In the following years from 2004 to 2006, we'd often play some heavy "under the influence" sessions together. We even managed to get a couple of gigs around my home town in that period of our lives. Jesper Holst has co-written a few songs including "Brick By Brick", which actually made it to the final track listing of "Songs" (2008).

In 2005, I reunited musically with my old school mate and soul brother Troels Liljedahl. He's a very talented and extremely gifted musician. Whenever time seem suitable, we are always having a blast, an enormous joy in creating and playing music together. You could say, in an almost spiritually way. Well, at least, we're still keeping the lid off. Troels Liljedahl has co-written songs like "Trippin' Lane" and "Who's Your Daddy Now"  from "Songs" (2008) and "85' " from "Safe Keepings" (2010).

The album "Songs" was my first real go as an independent musician. The album was entirely produced and engineered at home by myself on a very low budget and with very little experience in the art of producing an entire album, unfortunately.  The album was released on November 3th 2008 on limited compact discs and digital download. In 2011 the album was permanently removed from most online retailers.

In 2010 I hooked up with various musicians at StudioPros, a Los Angeles based recording studio. This collaboration gave me an absolute freedom and a new perspective in the progress of writing, composing and performing music in a very different way than earlier on. I was surprisingly thrilled about that. The album "Safe Keepings" (2010) was the creative output of this wonderful time and space. In many ways, the entire progress on "Safe Keepings" (2010), truly inspired me as a musician and as a producer. I believe today, that this album of mine, provided me with a new musically direction, that may or may not have defined me as an artist. The album was originally released on December 20th 2010.

I've never really been pleased with the programmed drums track on the 2010 version of "85'." Originally, this drums track was only intended as a reference drums track, but for some unknown reason, we decided to keep it that way. Maybe due to rushing deadlines, who knows? I've been distressed about that decision ever since. The new 2014 version of "85' " features a brand new drums track performed by musician and drummer Joel Stumbaugh. It now sounds much more vibrant and more "alive and kicking". Exactly the way it always (in my head) was intended to sound.

Another track on the album "Walking Out That Door", was unfortunately also produced in a rush. It resulted in a failed mixing, leaving a maximum gain overdrive at the end of the track. Looking back now, we'd made some real insufficient and awkward decisions in the final hours of producing this album. The new 2014 version of "Walking Out That Door" has been remixed and reproduced from the original 2010 recordings. The new modified version finally sounds the way it was originally intended.

The album title track "Safe Keepings" was provided with a new bass tracks on the 2014 edition.

Now, once and for all, the album stands out just the way it was originally intended. Hope you'll hear the difference.

The songwriting and beginning studio sessions for the album "Dreaming While You Sleep" started in early 2011.

This time around, I was in search of a more piano based and organic and vibrant live sounding landscape to accompany my new songs. Once again, I hooked up with various musicians from StudioPros in Los Angeles supported by my own crew, Troels Liljedahl, Jesper Holst and Alex Puddu on drums.

The first single from this album "Cupid Stupid" was a piano ballad piece accompanied by a Pink Floyd inspired guitar lead track. The song was originally released as a single in 2011 and supported by a "black and white" morally censored music video. The single "Cupid Stupid" was later re-released in a new enhanced edition on July 2th 2012. This single included another song from the album studio sessions, a track entitled "In Love With Your World".

In between sessions, just to get my mind on something else, I was working on a completely different project; a dance oriented saxophonized pop song entitled "Don't Really Care About Your Problems". This song was not originally a part of the album project and was therefore not included on the track listing of
"Dreaming While You Sleep". Anyway though, it was shortly included on a Digital Deluxe Edition of the album. "Don't Really Care About Your Problems" was released as a "stand alone" single on May 18th 2012.

The studio sessions continued with new songs emerging from my various states of mind. The 2nd single, another piano piece entitled "Whatever Makes You Happy" was released on October 1th 2012 followed by the spiritual rock n' roll single "Something To Believe In" released on February 18th 2013; and the Michael Jackson beat inspired pop song "Love Is.." released on July 8th 2013 and finally, the financial breakdown single "New York City" featuring Alex Puddu on slow drums. The single was released on December 1th 2013.

In 2016, a new modified and remastered edition of the album was released. The Revised Edition of "Dreaming While You Sleep" was released on October 20th 2016. The new Revised Edition includes all new modified and remastered versions of "Something To Believe In", "Whatever Makes You Happy", "One Day", "Merciful Me", "Godspeed" and "Carpe Diem". The album also includes 2 previously unreleased and 2016 modified tracks "Don't Really Care About Your Problems (2016 version)" and "Rescue Me" . The 2016 version of "Don't Really Care About Your Problems" was released on single November 6th 2016.

In late 2014 I began the process of writing some songs in Danish, mainly by encouragement from family and friends.

It all started out with a late night recording of a simple synthesizer demo track, with me singing along in Danish for the very first time.
I didn’t make any further notice or fuss about this specific track, probably thinking to myself, this recording will never see the light of day.

Anyway, some weeks later I was yet again working in my studio with musician Troels Liljedahl, and I decided to play this Danish late night recording to him - not really knowing what to expect and how he would or would not, react or respond to it.  At least, I hoped for some kind of "nice try" and "keep up the good work" credit.
Must admit, I was a bit shaken and blown away by his immediate reaction. He almost cried and seriously encouraged me to make this recording into a real song.  Well, that's in short terms how it all started. The EP project kicks off from this point forward.

The track eventually turned into “Ikke Flere Chancer” (No More Chances) and premiered on Vimeo and YouTube in May 2015 as a forerunner of this Danish album project of mine entitled “Selvudskridelser”.

When you’re schooled to write and musically express yourself in English, writing lyrics and singing along in your native lauguage can be a very difficult and challenging task, I must say. However, I'd managed to overcome the task with some supportive help from old school Danish songwriter and composer Bjarne Jes Hansen, who kindly lent me some of his lyrics on “Tegnet Hele Verden” (Drawing the World).

On this album I hooked up with two new gifted musicians, Tom Sinnett on Bass and Maria Griegoryeva on Strings.

The album was released on November 9th 2015.

Thanks for listening and for your continued support.